It’s On: Where Explanation Remains Required

Brace yourself, Gentle Reader. It’s a day for fundamentals and fundamental questions:

Have you been asked those questions anywhere else lately? Have you asked them of yourself? Or are you baffled as to why longtime opinion-spouter and widely celebrated pompous ass Fran Porretto has called them “fundamental?”

In two of the four cases above, the typical respondent will be quick to answer. In the other two, he’s likely to want to ponder the matter, perhaps even doubting whether the question itself “makes sense.” But many will go zero for four, at least under an empirical treatment of the matter.

Beneath those four questions lies one that’s more basic still:

What does it mean to own something…or someone?

If you’re under thirty years old, there are certain names familiar to us older farts that you probably never heard in school. One of those, perhaps the most important of them, is John Locke.

Locke, a seventeenth century physician who also put his prodigious intelligence to moral and political philosophy, was the first of the Enlightenment thinkers to give serious consideration to the concept of property, specifically property in material things. His Two Treatises of Government, coupled to Adam Smith’s An Inquiry into the Nature and Causes of the Wealth of Nations, are the cornerstones of the ideals expressed in the greatest two hundred words of prose ever penned:

We hold these truths to be self-evident, that all men are created equal, that they are endowed by their Creator with certain unalienable Rights, that among these are Life, Liberty and the pursuit of Happiness. That to secure these rights, Governments are instituted among Men, deriving their just powers from the consent of the governed, That whenever any Form of Government becomes destructive of these ends, it is the Right of the People to alter or to abolish it, and to institute new Government, laying its foundation on such principles and organizing its powers in such form, as to them shall seem most likely to effect their Safety and Happiness. Prudence, indeed, will dictate that Governments long established should not be changed for light and transient causes; and accordingly all experience hath shewn, that mankind are more disposed to suffer, while evils are sufferable, than to right themselves by abolishing the forms to which they are accustomed. But when a long train of abuses and usurpations, pursuing invariably the same Object evinces a design to reduce them under absolute Despotism, it is their right, it is their duty, to throw off such Government, and to provide new Guards for their future security.

It is with infinite sadness that I note that any under-thirties in the audience might never have been presented with that in school, either.

Locke concerned himself with how a material thing becomes property, and arrived at a thesis based on the investment of human labor in the thing to be owned. The essence of his thesis can be captured in a simple diagram: 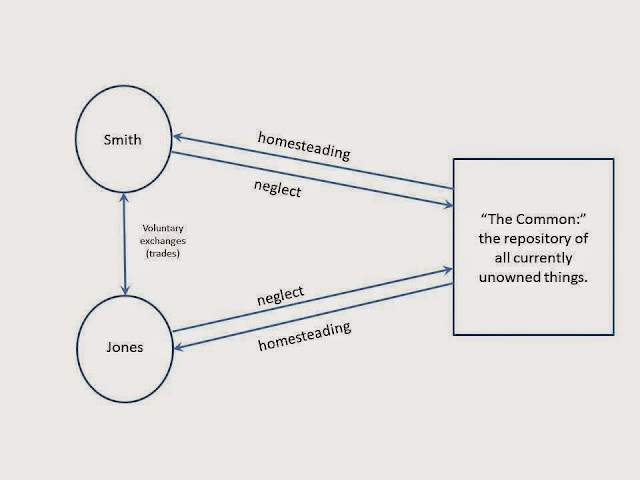 Unowned items reside conceptually in the common, from which they can be made property by any moral agent by homesteading: the investment in the item of enough labor to “enclose it from the common.” (Locke used the example of gathering berries from a wild bush as his illustration of this operation.) Inversely, an owned item can revert to unowned if its owner neglects it sufficiently that it can no longer be distinguished from the common. (For this operation, I like the example of leaving your Chevy on the side of the Cross Bronx Expressway with the keys in the ignition.) Owned items can pass from owner to owner through trade, a voluntary process in which the current owner surrenders his title to a new one for some consideration.

Locke deemed the attachments conferred by these processes to belong to the category of natural rights: morally ironclad associations that arise from the nature of Man and the laws of the universe in which we live. By giving property a moral character, Locke invalidated Smith’s acquisition of (or interference with) Jones’s property by force or fraud: the diametrical opposite of voluntary exchange. Force and fraud are the inverse of rights; no right can be premised upon them without destroying the very concept of rights.

All of economics, from Adam Smith onward, is premised on the Lockean conceptions of property and natural rights. And there are those two hundred words I quoted above, as well.

I’ve said it before, and I’ll say it again:

Men must be free
Because nothing else can be.

“Free” in the above context has two quite distinct meanings: one when applied to men’s property, and one when applied to men themselves. In the former case, “free” means “without cost.” But even an isolated Robinson Crusoe type, alone on his island, cannot properly regard any of the bounties of the island as “free” in that sense, for he must go to the effort of gathering them at the very least. In the latter case, “free” means “not subject to external coercion or constraint:” the political meaning of freedom. Both senses of the word are bound to the understanding of property and property rights, which brings us back to the questions at the beginning of this tirade:

If we apply the Lockean standard to these questions, we get fairly simple answers easily defended from first principles. However, in at least three of those five cases, governments habitually act as if they disagree — and they back up their positions with guns.

Not one square inch of land surface in these United States is immune from property taxes: literally, a rent you must pay to occupy the plot upon which you live. Fail to pay that rent and you’ll be involuntarily ejected from your home, quite possibly at gunpoint. So who owns the ground on which you stand?

Under the contractarian basis on which the Constitution and all the lesser state and county charters are premised, the law, whatever it may be, is the joint property of the American people; though we formulate it through representatives, its implementation and its protections are uniform, as the Fourteenth Amendment was intended to emphasize. More, any citizen has as much law enforcement power as any other, badges and municipal salaries notwithstanding. So why is it that police are deemed to exercise command authority over private persons, such that for the latter to “disobey” the former constitutes a cause for arrest?

One comes to self-ownership by a process of “self-homesteading:” the acquisition of learning and capability that results in a self-supporting adult. More, the Thirteenth Amendment to the Constitution of the United States supposedly put a permanent end to slavery and involuntary servitude: i.e., the ownership of persons by other persons or institutions. So why do we have a conscription law, which requires all young men to register with the Selective Service system when they turn eighteen?

The essential difference between a free society and other sorts is that in a free society, the individual possesses rights against the State. Those rights are Lockean property rights: to oneself, to one’s freedom of action, and to one’s honestly acquired property. Given that force, the defining characteristic of the State, is the exact opposite of rights, there can never be a right of any description that’s premised upon forcible coercion or constraint (i.e., intimidation through the threat of forcible punishment).

How does that comport with all the incredibly sloppy “rights talk” afloat in our national discourse:

Isn’t it time we started whacking “rights-mongers” across the chops with a wet mackerel for their demonstrable abuse of the most important conception in all of human thought?

This morning’s rant was triggered by this piece from the invaluable David De Gerolamo:

Another clash between protesters and police lit up Ferguson, Mo., on Wednesday night, with police shooting tear gas into crowds and briefly arresting two journalists.

Reporters Ryan J. Reilly of The Huffington Post and Wesley Lowery of The Washington Post were briefly arrested while covering the protests after police entered a McDonald’s where the two were working. Reilly tweeted his arrest as several reports emerged that police on the scene were telling TV crews to leave.…

“Oh, God,” Ferguson Police Chief Thomas Jackson said when told of the arrests by the Los Angeles Times. “I told them to release them,” Jackson said of the two reporters. His department was in command.

The enveloping context of the arrests was Ferguson police using SWAT tactics to empty a peaceable restaurant, in which the aforementioned reporters were eating and working. By what right did the police assert an owner’s rights over someone else’s property? By what right did they command the immediate obedience of private citizens engaged in wholly legitimate, wholly peaceful activities? Given the context, had the reporters resisted arrest, they might well have been shot down on the instant. By what right would the Ferguson police have deprived those men of their most fundamental properties: their lives?

That sort of conduct by armed agents of the State is characteristic of war zones: places where no rights are recognized, where the preponderance of force is the one and only standard of ownership, where “you’re either one of us or the enemy.” Is Ferguson, Missouri at war? If so, who are the combatants? What uniforms do they wear, if any?

Have the governments of these United States — some 88,000 in number — gone to war against the nation’s citizens? Was it declared at some point, published in two-point type in some obscure periodical like the pro forma announcement of a zoning board meeting to which the public would be unwelcome, such that we were intended to miss it?

Answer those questions for yourself. If you find the answers disagreeable, you might want to ponder which side you’re on.