We Won’t Get A Clearer Warning

What Is The Diminutive Of “Snark?”

In foreign relations, here we are today: the US is in a de facto but undeclared war with Russia. No one calls it that, but that’s what it amounts to when the US is providing armaments through intermediaries to the forces that Russia is battling on its border. This intensifies and escalates conflict, same as sanctions. The dangers right now are intense, on all fronts. It’s not clear that decision makers even understand what they are doing.

Or maybe they do. Since the end of the Cold War, the US military-industrial complex has been searching for a reliable enemy that the US population could hate, as a way to distract from the misdeeds of the political elite at home. After decades of cycling through them, it appears that the old enemy was the best enemy. And with a small turn of a dial, vast swaths of high-end opinion are exclusively focused on the terrible plight of Ukraine.[1]

See, Zelensky, the stiletto-heels-prancing, 21st-century apotheosis of Churchill (with an allergy to Ukrainian political parties), is the new standard bearer of what is laughingly referred to as liberal democracy or, in Nancy Peloisi’s shorthand, “our democracy.” And you better believe that assassin Putin is hell bent on reestablishing the Soviet Union and communism.

See war pigs Hannity and Levin for the state-of-the-art hysteria and distortion:

If you were looking for nuanced, objective, fair, historically-informed commentary on a deadly serious matter instead of vapid war piggery, well then that was just a complete waste of nine minutes of your life.

And for a glimpse of real tire-iron and broken-bottle message whoring (AKA “strategic communications”) be sure you don’t miss this article by Dan Cohen at MintPress News: “Ukraine’s Propaganda War: International PR Firms, DC Lobbyists and CIA Cutouts.” (H/t: South Front.) 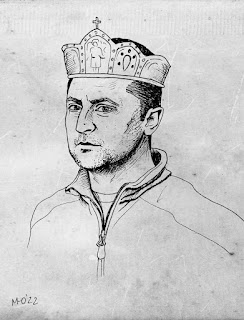 Notes
[1] “How Seventy Years of Progress Came to an End.” By Jeffrey A. Tucker, Brownstone Institute, 3/11/22. See also Craig Murray for the U.S./U.K./NATO need for a Russian enemy: “[Then, post-1991, the] truth, of course, was that it had always been in the interest of MI6, the Defence Intelligence Service, the British armed forces, of their American counterparts, and of all their NATO counterparts, massively to exaggerate the strength of the Red Army. Because the greater the perceived enemy, the more we needed to throw money at MI6, the Defence Intelligence Service, the British armed forces, their American counterparts, and at all their NATO counterparts.”