Crisis: The Agar of Leviathan

I’ve been warned. I’ve been reminded. I’ve been catechized about the unwisdom of giving in to fury. It’s not good for me. If it’s good for you, know that I envy you, because there’s a lot to be angry about these days.

The foofaurauw over the National Football League’s decision to “support the players” in their “protests” against the national anthem and flag of the United States rather than to enforce the league’s rules about proper conduct during the anthem has caused a significant number of previously faithful football fans to tune out. I expect that number to grow still further, especially in light of the mealy-mouthed statements from head coaches, marquee players, and Commissioner Roger Goodell. It will ultimately, if not soon enough for any decent American’s tastes, crash the league financially.

Yet the disease is spreading: 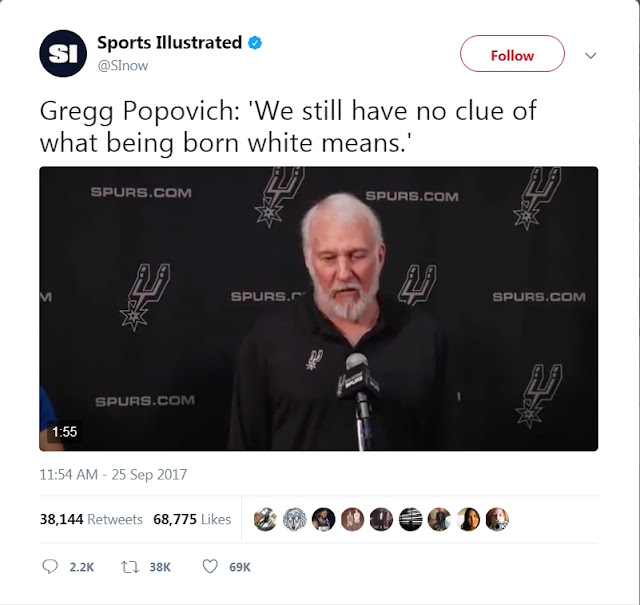 Gregg Popovich is the head coach of the San Antonio Spurs basketball team. That team is composed largely of American Negroes, like every other National Basketball Association team and a great many college teams, too. There isn’t one NBA player whose salary is less than the high six figures. There isn’t one who couldn’t augment his income by public appearances and the sale of autographed items, as many do. But supposedly they and theirs are “oppressed” by having to earn their incomes on a basketball court. Now their head coach tells us that we don’t know what it means to be born white.

To be born white in the U.S.A. is to inherit a six-digit share of a $20 trillion debt you had no part in borrowing or spending. Your parents, should you be lucky enough to have any, might look upon you as a blessing, but they must also accept the immense burdens and hazards that will accompany your upbringing and maturation: on average, about $1 million for you and each of your siblings until age twenty-one.

From the instant of your birth, you’re a number in a system designed to tax and control you. Government busybodies will use you as an excuse to intrude into your family’s most intimate operations. Neighborhood busybodies supposedly determined to “keep you safe” will help them. “Educators” with little interest in actual education will propagandize you about a wide variety of “issues.” This will be in support of your share of white guilt: your responsibility for crimes committed by others long dead and not even remotely related to you. Yet those “educators” will deny you answers to many of your questions. You’ll have to look elsewhere for honest information about history and economics. That condition will last all the way through college, should you be inclined toward a “higher” education. Dare to mention in class that before the Civil War there were both white and black slaveholders and white and black slaves, or that the institution of slavery is still rampant among nonwhites in Africa and the Middle East, and you’ll be mobbed or worse.

Should you reach your maturity determined to be a decent and productive citizen, you’ll be penalized for the color of your skin. White people aren’t entitled to anything, you see; only blacks are entitled. The Equal Employment Opportunity Commission isn’t concerned with whether you can get work, only with whether your black competitor can. In any head to head contest with a black employment applicant, your qualifications will weigh less heavily in your favor than the color of his skin will weigh in his. A company determined to hire you rather than him will need to watch its “employment statistics” closely, lest it give the EEOC an excuse to impose “supervision” on it.

But you’re white, which means no excuses for anything. You’ll find work, and you’ll labor diligently at it. And on paycheck day, the list of deductions from your supposed salary will remind you of just what the State thinks of you: a resource to be mulcted, in large measure for the support of nonwhite idlers and their bastards. Seven out of every ten black babies born today are illegitimate – born out of wedlock. Child support from the father? Not unless the father is an NBA power forward. But to note that fact in public would put you at extreme hazard.

Still, you’ll soldier on. You’re white; it’s expected of you. As the bumper stickers say, millions on welfare depend on you, so you can’t be allowed to slack off. It would be a crime against society and a betrayal of your “white privilege:” the privilege of being blamed for others’ sins while simultaneously having to pay for them.

Where will you live? In a city, where the young blacks play the “knockout game” and usually get away with it? In a suburb, where mobs of black teens terrorize schools, parks, and shopping malls? Where the “authorities” will harangue you mercilessly about permits, property taxes, the height of your fence, and your unworthiness to have a handgun? Or in the country, where there’s little work even for a white farmhand, the alternative labor supply – illegal aliens from south of the border – being so copious and so cheap? Decisions, decisions…

You’ll manage. If there’s anything inherently noble about the white American, it’s that he manages. He keeps trying, no matter how heavy the burdens or how bleak the outlook. But the insults, both overt and covert, will keep coming lifelong. They’re particularly dense in mass entertainments, which appear consciously designed to disparage every last one of the values you hold. Hey, they have to offend someone — giving offense is the style in comedy today, don’t y’know – and you’re the safest candidate. Especially if you’re a white male Christian…or, may God protect you, a Catholic.

Perhaps you’ll contrive to retire, somehow. That’s becoming quite a feat. At any rate, fewer of us manage it with each passing year. But the insults won’t stop even there. For daring to vote for conservative candidates who at least talk a good game, you’ll be denounced as a racist. To go to a rally for such a candidate, much less to volunteer to work for one, is an act of unusual courage. Well organized groups will target you, expose your most private information, possibly trash your house or attack your loved ones. No, you still can’t have a handgun. Handguns are for criminals only; it’s the law.

And of course, when you quit this vale of tears, whatever you’ve managed to scrape together for your inheritors will be truncated by the State. (Our motto: “The needs of the State come first.”) However, your share of the white American’s burden will be passed to them with interest.

That’s the barest skeleton of your “white privilege.” Think of it as a Christmas tree hung with many “ornaments,” some heavier than others. Every day still more are hung on it…and you. The tree is bowing under the weight. There’s no way to know when it will snap.

Yes, I’m angry. A lot of whites are. Should this disrespect for us and for the symbols of the country we built – the only things black slaves built were tar paper shacks and the fortunes of a few plantation owners! – spread to baseball or hockey, we might decide to crash the entire overpaid institution of professional sports; the NFL and NBA are already on notice. That might be only the opening stages of a thoroughgoing “readjustment” of national attitudes and institutions.

Go ahead and call me a racist. Go ahead! We both know you want to! See how much I care?