All You Need To Know

The true goal of the Great Reset.

They [socialists/the Davos slime] embarked on this Great Reset solely for the purpose of defaulting on their socialist promises made by buying off present generations with the labor of future generations. We call this in modern parlance debt.

Now that the debt is unpayable and the future liabilities of their governments overwhelming everything they have unleashed a torrent of policies around the world to starve, freeze and kill off entire generations of taxpayers who they can’t afford to bribe anymore.

COVID-9/11, no matter how you look at it, as a political operation has shortened lifespans in the U.S. by 18 months in 2020, according to the CDC. What will those numbers look like in 2021? This is a radical contraction which lifted trillions of unfunded liabilities in Social Security and Medicare payments from future U.S. governments.

And they call libertarians heartless?[1] 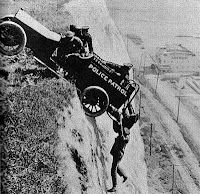 I’ve thought the same thing. The debt, unfunded liabilities, and baked-in-the-cake inflation storm are insoluable problems. Nonsense such as “modern monetary theory” is actually pushed by people with a lot of stolen letters after their names where it’s just another name for magical thinking. And, pilgrims, nothing short of actual magic is going to paper over the advanced gangrenous horror that “our” economic, monetary, fiscal, and debt “policies” have created.

Given that taxpayers cannot pay off the huge sums when the check might eventually be presented, the only option for the parasite class is do the Thelma and Louise thing with all of us in the back seat but them with the parachutes.

The Great Reset is just another way of saying civilizational apocalypse. The behavior of the Australian cops is like a klew — a rather obvious hint of what’s yet to come. Schwab may bill the “Reset” as globalist nirvana but it’s vicious destruction to the core and nothing on the other side of that “reset” won’t look like a Steven King landscape and eventually the fanciest yachts, most luscious Argentinian land, choicest Alpine communities, and most impregnable, well-stocked, remote, hidden, solar-powered redoubts in Oregon will eventually mean nothing when there is no longer the marginally-functioning world-wide production and distribution miracle that there is now. Then it’s local bandido time. But the lizards don’t know that. It’s a de facto runaway train and there ain’t no Denzel.

At this grotesque moment in Western, if not human history, it’s too dangerous for the lizards to take responsibility for the fact that

That would expose the fraud of all the statists, communists, socialists, progressives, bleeding hearts, and Wall Street and banking whores who have afflicted us for the last century at least.