Parental Rights, From the Perspective of a Parent

What is left of Western moral authority?

It became clear [after the author’s research] that what’s been happening in Syria was not a spontaneous, organic, popular uprising against a tyrant, but a proxy regime-change attempt war in the works since the mid 2000’s against the quite popular Assad. This effort was spearheaded by the US, UK, France, and Israel, using Sunni violent fundamentalists and extremists . . . armed and funded by the West and [the extremists’] regional allies of Saudi Arabia, Turkey, and Qatar to start the violence and do the dirty work.

And the result? How about this: 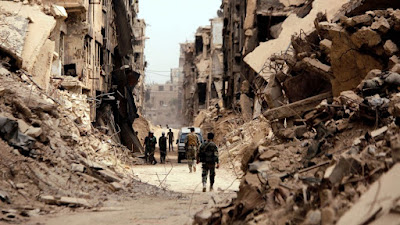 This is the exact, horrifying, predictable result of the policies described above. This is what the West and the Turkish, Qatari and Saudi dirtbags are about. The highest and best expression of important segments of the “civilized” world. And millions displaced and over 400,000 dead. For nothing.

Notes
[1] “Red Alert: What Seeing The War in Syria Taught Me About US/Western Government and Media Propaganda.” By Janice Kortkamp, LewRockwell.com, 4/2/22.